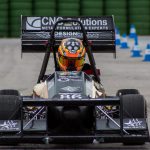 UoP6e was based on the competitive UoP5evo . The chassis was constructed using the same materials as UoP5evo but with more efficient techniques in order to make the process faster and achieving a higher quality at the finished product. Furthermore, changes were done at the back of the chassis in order to simplify the geometry and thus achieve better internal packaging. In terms of aero, the philosophy with a nosecone airfoil was kept while introducing a more an effective diffuser which works better with the new bigger (due to the increase of the rear track) rear wing into which DRS was introduced .Regarding the drivetrain, the same motor EMRAX 228 was used and the same two stages gearbox as UoP5evo. At last, at the electronics lower capacity batteries was managed by opting for higher voltage. In addition, the use of CAN-bus notes was maintained for a simplified wiring. The UoP6e participated in the Formula Student Germany 2018 Competition and conquered the 21st place among the most competitive contestants of the world. 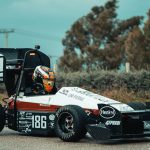 UoP5evo was an upgrade on almost every aspect of our car in comparison with UoP5e. The chassis was constructed using the cut and fold technique, with honeycomb aluminum panels. The results were superior mechanical properties and better weight to stiffness ratio. Furthermore, we achieved improved ergonomics and driver’s safety. In terms of aero, we chose to redesign it from scratch. The front wing was made shorter, and the back wing was consisted of two instead of four elements. Moreover, the undertray was made more aggressive and efficient. Finally, the side foils were abandoned for a nose cone foil able to balance the front and rear wings. At last our electronics were completely redesigned too. By opting for higher voltage batteries, we managed to use lower capacity batteries. In addition, we used the CAN protocol leading to simplified wiring. The lower capacity batteries and the unified wiring harness led to a decrease in the overall weight of our car. 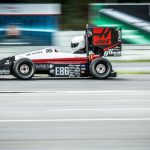 Featuring a chassis made entirely out of honeycomb alluminum panels, a unique choice among other FS teams, better driver ergonomics and impressive efficiency, while still displaying high performance on the track, the UoP5e is the result of hard work and the mentality of a pioneer. The lightweight but durable frame, along with the advanced and innovative aerodynamic package make the UoP5e not only a joy to drive, but also a joy to watch going around the track. Powered by a fully electric powertrain combined with a custom made gearbox to optimize motor torque delivery, while the use of the aforementioned cut & fold monocoque chassis offers a sustainable yet durable and stiff structure, optimized to safely accommodate a wide range of drivers and also contributing in keeping Power/Weight ratio high. 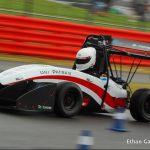 After 10 years of participating in Formula Student competitions and a lot of research in the evolution of motorsport, the team took the major and difficult decision to leave internal combustion engines, which marked the beginning of the “electric car era” for the team. UoP4e incorporates all knowledge and experience from the three previous UoP Formula Student racecars, namely a carbon fiber monocoque chassis and 10” wheels. The car’s highlight is probably the drivetrain/powertrain sub-system. In regards to the transmission, electric motor and accumulator, the team had these three words on their mind during the car’s development phase: Functionality – Durability – Lightweight. 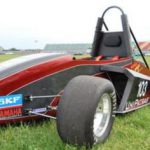 After receiving encouraging feedback from judges in previous years’ competitions, the 18 members of the team improved the UoP3 chassis construction, while redesigning the suspension system to reduce complinces. The powertrain sub-system was retained, albeit with a revised differential mount and exhaust system. The result was a slightly heavier car but way more reliable. UoP3Evo successfully participated in Formula Student Germany held in Hockenheimring and in Formula SAE Italy held in Autodromo Riccardo Paletti, finishing in all dynamic events that year, rendering the best results the team had this far. 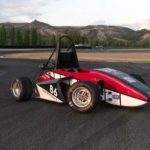 An alternative way of manufacturing came up during the designing process of UoP3. The changes applied would bring a major innovation in team’s history. A new frame was constructed from carbon fiber monocoque which became a key ingredient for UoP racing. The car being lightweight was a top priority and that led to a change in the engine used, as the team switched from a Yamaha XT600E (3AJ) to a Yamaha WR450. The third generation of the team, which consisted of 12 students, gathered all the feedback and experience from the design and construction of the two previous cars and aimed high. The racecar competed only in the FSAE Michigan competition of that year and proved significantly lighter than its predecessors. As of November 2016, UoP3 remains the lightest racecar of UoP Racing, weighting 175 kilos. 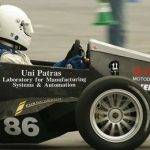 UoP2Evo is an almost complete upgrade of the UoP2. Using the same basic components, the chassis was redesigned to improve stiffness. At the same time, changes to almost all subsystems led to a further reduction of its total weight. Track was increased for stability, while dampers actuation was changed to push-rod. Moreover, a completely new, lighter and higher quality bodywork was built. The car participated successfully in all the events of the competitions UoP Racing took part in, which again helped the team gain valuable experience for development of future cars.​ 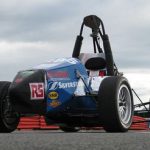 Aiming for the continuation of the project in the University of Patras, a brand new team of nine students participated in the 2005 FS Competition for the first time, as a Class 3 entry, presenting a new design solution for the next FS car to be manufactured. Simpler, cheaper and more straightforward solutions were adopted throughout the development of the car, using a steel tubular spaceframe and directly actuated dampers. UoP2 also marked the beginning of the single cylinder engine era for the team. All of the changes led to a more advanced and lighter car than UoP1.​ 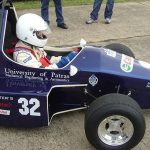 UoP1 was way ahead of its time, featuring an (in-house built) hybrid composite monocoque chassis, with a removable subframe, 10” wheels to minimize unsprung mass and inertia, and a 4-cylinder Yamaha engine. The team went on to win the IMechE Design award and conquered the first place in the overall scoreboard of the Class 2 in FSUK (the only European competition back in the day, held in Bruntingthorpe Proving Ground) in 2003 and was the first ever Greek entry in Class 1 in 2004. Reliability issues prevented the team to score high, but the experience gained from the competitions was of utmost importance for the evolution and future potential of the team. Since 2014, UoP1 has found a new home in the Hellenic Motor Museum as part of the permanent exhibition “Made by Hellas”, to serve as a reminder of how it all began.
Close Menu